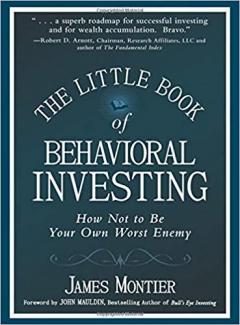 In Part I of this series, we discussed the importance of keeping costs low and diversification high. The third component of a good investment experience is behavior. As Warren Buffett’s mentor Benjamin Graham said, “The investor’s chief problem—even his worst enemy—is likely to be himself.” Indeed, an old colleague of ours used to say that the return you get from an investment is not so much about how the investment behaves but rather how you behave with the investment.

A great example is found in the Fidelity Magellan Fund during the tenure of the famous Peter Lynch. Magellan was open to the public in 1981, and during Lynch’s management through 1990, the fund earned a terrific annual return of 21.8% vs. the S&P 500’s 16.2%. Magellan started with $100 million in assets, and as it reported the high returns, money flooded in, including $2.3 billion in 1986 alone. So what happened with the average Magellan investor? After adjusting for the timing and size of cash flows, he received an annual return of only 13.4% (“Lessons from a Great Fund Manager’s Record”, CBS Moneywatch, 7/16/2010).

The large discrepancy between the fund return and the average investor’s return is explained by the common behavioral trait of performance-chasing. We tend to assign a high value to recent high performance, and we are quick to abandon funds with recent poor performance. Unfortunately, we can only buy future returns, not past returns.

A second observable behavior in Magellan’s history is the phenomenon of herding. We tend to feel most comfortable when replicating the actions of our peers. When it comes to investing however, what is comfortable is rarely profitable, as noted by Robert Arnott.

Other common behavioral pitfalls include anchoring (the fixation on a targeted future price for an investment that bears no relationship to reality), overconfidence (well over half of us consider ourselves to be above average investors), and self-attribution bias (the tendency to attribute our successes to skill and our failures to bad luck).

Perhaps the deadliest behavioral foible is our tendency to be fooled by randomness, the title of an excellent book by Nassim Nicholas Taleb. For example, a few years of above average performance by a fund manager out of thousands of them is something we should expect to happen from chance alone, yet once he or she is on the cover of Money Magazine and the talk of the cocktail party circuit, many will find it difficult to resist the allure of performance-chasing.

Behavioral investing is an enormous topic, and we have barely scratched the surface here. An excellent introductory book is the one shown in the above photo. At the end of the day, we are only human, and while we will never completely eliminate tendencies toward emotional and suboptimal decision-making, gaining self-awareness is an essential first step.