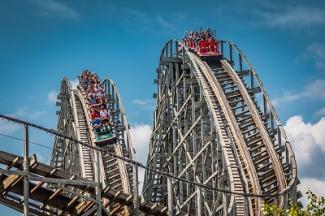 Are you feeling a bit of pain in your neck? Perhaps it’s whiplash from watching the market gyrations over the last nine trading days. Seriously, the volatility is unlike anything we have seen since the Global Financial Crisis of 2007-9. Using a simple measure of the difference between the daily high and low, volatility has quadrupled from the year-to-date period ending February 21st to the last eight trading days ending March 5th. Furthermore, since volatility has a very strong serial correlation, we should expect more such days. After this roller-coaster ride, the Dow remains about 9.9% below its February 21st level. Although we cannot prove it, we believe that most of this price fluctuation is attributable to the activity of professional traders and active fund managers rather than individual investors panicking one day and being giddy with optimism the next. We must also mention that the 10-year Treasury note closed with an all-time low yield of 0.93%.

Please note that the term "volatility" refers equally to up days as well as down days. The two up days of Monday (March 2nd) and today (March 4th) were attributed to the market’s anticipation of the Fed’s half-point rate cut and Joe Biden doing much better than expected on Super Tuesday, respectively.

Regarding the half-point cut, if you visualize the Fed as wielding a six-shooter to rescue the economy from the ravages of the dastardly virus, then it just used two of its bullets and has only four left. Of course, there are other tools available such as quantitative easing where the Fed injects liquidity into the financial markets by purchasing government-backed securities from banks. However, one must consider whether it’s wise to increase currency in circulation when we may be facing a potential shortage of goods due to disruption of manufacturing, starting but certainly not ending with China. This combined with panic-buying could be a perfect recipe for inflation. Of course, the more immediate concern is recession, but as we learned from the "stagflation" days of the 1970s, they are not mutually exclusive.

Regarding the results of Super Tuesday, it’s definitely looking like a Trump vs. Biden contest for November. Electionbettingodds.com (a website that aggregates several prediction markets) now has Biden with an 81% probability of capturing the Democratic nomination. The probability of Trump winning the general election stands at 56%. Regardless of who wins, Congress will likely remain divided with the Democrats controlling the House and Republicans the Senate, so no major overhaul of the health care system is likely to occur unless the Supreme Court rules Obamacare to be unconstitutional sometime after the election. Health care stocks remain about 5.9% below their February 21st close, based on the Vanguard Health Care Index Fund ETF, VHT.

In the U.S., we are just at the beginning stages of what may be a full-on outbreak of COVID-19. Clearly, the market has already anticipated a decline in economic activity, but we have no idea exactly what level of economic slowdown the market has discounted into current prices or how much further prices would fall if the actual hit from coronavirus is worse than the consensus expectation.

So what should you do as an investor? Choosing to sit this one out is a perfectly acceptable response, and for most investors, that would be our recommendation.

If, however, you have some cash that you were planning on adding to your long-term investment portfolio, then you might consider putting it into a low-cost, highly diversified fund covering the broad US stock market or a more generalized global equity fund, assuming it is in line with your willingness, ability, and need to take risk.

In the long run, we fully expect America to come out on the other side of this pandemic as a stronger, and perhaps more self-reliant nation. Long-term investors should expect to be rewarded. For investors in a balanced portfolio of stocks and bonds, we have not yet seen prices move enough to warrant placing rebalancing trades.