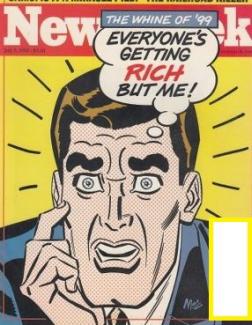 “Everyone’s Getting Rich But Me!” shouted out the Newsweek cover of July 5th in what was aptly named “The Whine of ’99.” It was only eight months before the top of an "irrationally exuberant" bull market that was driven by technology stocks in general and internet-related stocks in particular. The day-traders could do no wrong and were making money hand-over-fist. Sound familiar? Perhaps substitute Robinhood users for day-traders and the parallels may become clearer.

To us, that Newsweek cover is a perfect representation of the behavioral finance phenomenon known as “the fear of missing out” or FOMO, the tendency for investors to buy the same stocks as their peers regardless of the extent to which they believe them to be overvalued. Another term for it is herding. The motivation behind it is completely understandable, as nobody wants to see their friends and colleagues enjoy a newfound standard of living that is unattainable for himself. That left-behind feeling is far more painful than losing a chunk of money, providing the loser is not alone.

One company that appears to be the poster child for FOMO is Tesla which currently trades at a paltry 106 times forward earnings (Morningstar, 10/27/20). The market values it more highly than all the other automobile manufacturers combined, yet it accounts for less than 1% of projected vehicles sold in 2020. What could go wrong?

The answer may lie in the stocks that were at the top of their game before the dot-com bubble burst, and no, we are not talking about Pets.com. Let’s take a look at Cisco Systems, the company that Barron’s deemed “The Internet’s Backbone”. It enjoyed a spectacular hockey stick rise in the late 1990s with a mirror image fall in the early 2000s. To this day, it has yet to return to its peak level. However, what has returned to normal is its price-to-earnings ratio, now at 12.2 according to Morningstar. The fact that some late-to-the-party investors lost their shirts in Cisco in no way detracts from it being a great company that plays a vital role in the economy. Someday, the same might be said for Tesla.

The moral of the story—whenever you feel compelled to buy a stock because friends or colleagues own it and are bragging about how well they have done with it, remember that joining the herd can sometimes lead to a financial slaughter. As for "buying on the dips", that is a strategy that works great until it stops working, as it did for buyers of Cisco post April 2000.