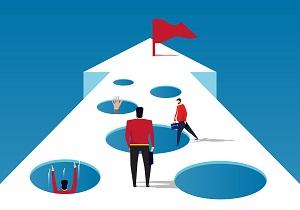 The Potential Pitfalls of Early Retirement

As a former actuary for a large insurance company, I spent many years projecting income for different lines of life and health insurance. More often than not, the underlying assumptions driving future profits proved to be overly optimistic, especially the new business projections from the company’s marketing department. Furthermore, claim costs often exceeded the underlying assumptions originally used to set premiums for different insurance products.

This experience influences my view of the FIRE (financial independence, retire early) movement. The decision to retire early is sometimes (but not always) based upon a long-term projection of future expenses, incomes, and financial assets. Inevitably, these projections utilize a complex set of assumptions, including inflation rates, asset class returns, and largely unpredictable expenses such as health care. What could possibly go wrong?

Suze Orman tells us in a podcast unsubtly entitled “Why I Hate the FIRE Movement”:

“But…as you get older, things happen. You get hit by a car. You fall down on the ice You get sick. You get cancer…You need at least $5 million, or $6 million…Really you might need $10 million.”

In case we missed it, she goes on to admonish us against the idea of early retirement:

“You can do it if you want to. I personally think it is the biggest mistake, financially speaking, you will ever, ever make in your lifetime…You will get burned if you play with FIRE.”

While we consider Orman’s $5 to $10 million minimum to be somewhat exaggerated, we agree that potential FIRE adherents should pay perhaps even more attention to the nonfinancial pitfalls of early retirement identified by Financial Samurai. These include a massive onset of self-doubt, a loss of commonality with peers, and yes, boredom.

In closing, we note that early retirement does not have to be an all-or-none decision, as we know many people who retired from their full-time job who subsequently took up part-time work or consulting on an ad hoc basis. If you would like a second opinion on whether early retirement is a good idea for you, please email us at info@clarityca.com or call us at 800-345-4635.